A key support service for more than 2000 people affected by autism and Asperger's syndrome has been saved by a last-minute merger after funding changes sparked by the rollout of the National Disability Insurance Scheme cast doubt over its future.

Autism Asperger ACT services are to be folded into a specialised autism unit run by Canberra-based organisation Marymead under a move hoped to bolster support for children and families.

Chief executive Rhonda Penney said changes to the disability sector funding model had forced the governance committee to consider closing down the organisation, a move that would have been "disastrous" for families who depended on its services.

"Small organisations are having a hard time adjusting to the new business model because previously they were funded by the ACT government," she said.

"We had grants from Disability ACT but they weren't sufficient and it takes a while to adapt to a business model and our finance systems weren't ready for it."

The organisation's board met last week and signalled its intention to merge with Marymead, which supports children, young people and their families, to ensure services continued long-term.

AAACT will be liquidated and the merger is expected to be finalised in the next several months.

Marymead chief executive Camilla Rowland said the continuation of autism-specific early intervention, education and support services was vitally important and the collapse of the organisation would have been highly stressful for vulnerable families.

"By transferring service delivery to us we're able to provide continuity of care and staff," she said.

"We do not want families to have that level of stress where it starts to affect their functioning as a family."

Mrs Rowland said services provided by the organisation, as well as about three full-time staff positions, would be incorporated into the specialised unit at Marymead's Narrabundah site.

"From Marymead's point of view, the services provided by Autism Asperger ACT have been important services to the community and we would not like to see those services lost.

"Marymead has been providing services to children and families for almost 50 years and has a long history of assisting people with disabilities, including those with autism and Asperger's diagnoses."

Mrs Rowland expected the merger would broaden opportunities to engage in research and develop clinical practice to better address the needs of people with autism.

It would also enable members and clients to access a broader range of locally based support and counselling services, facilities and resources, she said.

Mrs Rowland said the shift from a block funding model to individualised funding under the NDIS was affecting many small organisations in the ACT.

She said Autism Asperger ACT was the only organisation that had been in talks with Marymead so far but said it was open to discussions with other groups to ensure services for vulnerable families in the ACT and surrounding parts of NSW were maintained. 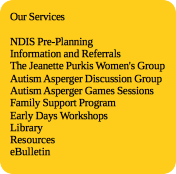 The service list on the right are the services that AAACT listed on its website as providing at the time of its demise.

With the arrival of the NDIS in the ACT, the AAACT Committee decided to move the organisation from its origins, a volunteer organisation doing its best to support autistic people and their families, to become a service provision organisation.

Sadly, due to some unwise choices, AAACT was for a considerable time unable to contain its costs within its income.

Both the ACT Government and the NDIS have also contributed to the demise of AAACT. They simply don't understand autism … and they have little regard for the distinct nature of specific disability types. They were/are looking for the simple “silver bullet” solutions in the disability sector. Unfortunately, they don't understand that installing wheelchair ramps everywhere does not give autistic people access to mainstream and disability services that they need.

At the recent AAACT meeting, the autism community was told that AAACT has never been “NDIS accredited”. This shows that AAACT, the ACT Government and the NDIS just didn't get their “acts together” in respect of autistic clients and their families.

Generally, the ASD community appreciates Marymead for stepping in to maintain a group focused on ASD services. But that only meets part of the need.

Before its demise, AAACT dropped out of providing several valuable but unfunded (community supported) services. The ASD community in the ACT may decide to restore those services.

And SOfASD will continue its role advocating for autistic people and other people living with autism in the ACT.